Here Alejandro Bugarín of Alliott Global Alliance member in Spain, Abbantia Law Firm, gives an update of the current and uncertain situation of UK companies with employees in Spain leading up to the final Brexit agreement. 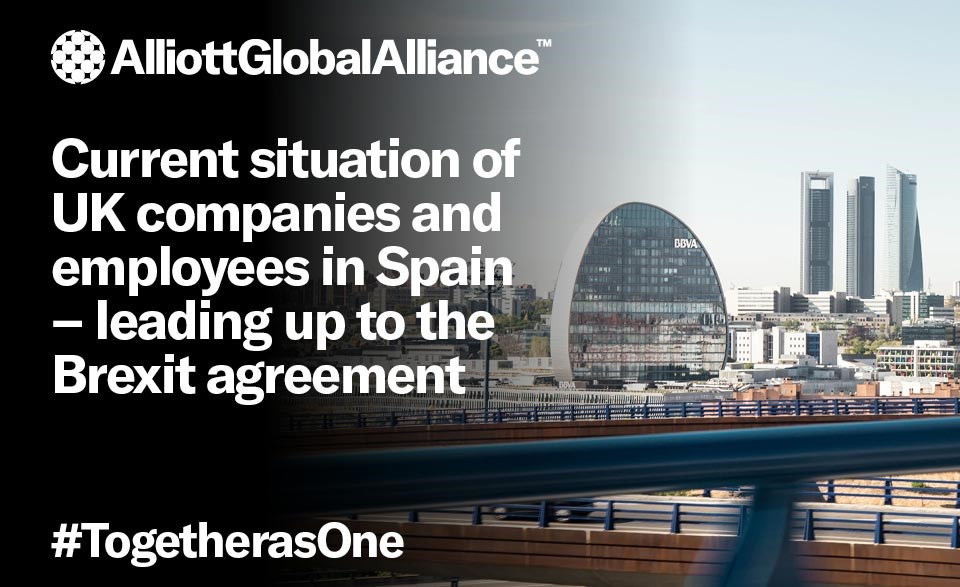 Alejandro Bugarín of Alliott Global Alliance member in Spain, Abbantia Law Firm, gives an update of the current and uncertain situation of UK companies with employees in Spain leading up to the final Brexit agreement.

The key word to define the current situation between the EU and the UK after Brexit is UNCERTAINTY.

This is because with the exit of the UK from the EU, the free movement of people, services and capitals will not be further applicable as a Fundamental Principle established in article 45 of the Treaty on the Functioning of the European Union. In the case of UK national workers who provide their services in Spain, whether for Spanish companies, or for companies from third countries with domicile and/or activity in Spain, the outlook is even more complicated, since it is necessary to carefully examine which legislation is applicable in each case and what limitations they may have or what conditions these workers must meet to do so.
We are currently in a transition period until the end of 2020, in which the regulations relating to the free movement of people, services and capitals are extended.

In principle, the uncertainty revolves around the possibility or not that the UK and the EU (or their respective member countries) reach an agreement on the matter of repatriation and expatriation of workers before the end of the current year, and under which conditions this eventual agreement would be signed, so in the article we will divide it into two possible scenarios: Brexit WITH AGREEMENT and Brexit WITHOUT AGREEMENT.

In the first case, the outlook for UK workers and companies that want to start their activity in Spain should not be very different from that before Brexit, that is, no prior authorization will be required to work and to carry out their own activity in Spain, and, if it exists in the future, there may be special procedures that most likely facilitate the entry and exit of workers and companies from the European Economic Area. However, given the current crisis derived from COVID-19, negotiations in this regard have been stalled or paralyzed, and not much progress has been made since March 2020.

In the second case, if there is no agreement, in principle the current provisions on immigration and foreigners would be applicable to UK workers and companies, as they will be considered as citizens from a country not belonging to the EU.

In this sense, on the one hand, any person who can prove a legal residence in Spain for more than five years can apply for a permanent residence. On the other hand, it is also necessary for companies that employ British workers in Spain to have an EU Registration Certificate dated prior to March 29. Thirdly, the Spanish Government has announced that it would unilaterally assume the content of the withdrawal agreement drawn up by the European Commission published on November 14th, 2018, in relation to the rights of British workers, for immigration and Social Security purposes . Finally, in the event that there is no agreement, British nationals must obtain a residence and work permit, under the conditions established in Organic Law 4/2000, of January 11th, on Rights and Freedoms of Foreigners in Spain and their Social Integration as well as in Law 45/1999 of November 29th, on the Displacement of Workers in the framework of a transnational provision of services.

It is also true that the UK and the rest of the countries belonging to the EU have agreements prior to the Treaty on the Functioning of the European Union, and this is the case of Spain, which has a Bilateral Agreement on Social Security between Spain and the United Kingdom, which includes, among other aspects, provisions to avoid the double contribution to Social Security in both countries, so that certain more beneficial conditions with respect to third countries will be maintained.

In any case, we understand that each case will have to be analyzed individually, in light of the circumstances that arise in the future (agreement or not), and to which each worker or company has in particular (date of start of activity in Spain, family or labour ties with Spanish companies or institutions, etc.), so we strongly recommend that you seek advice from one of the lawyers specialized in the matter.

With lawyers in Bilbao, Madrid and Seville, ABBANTIA has tailored itself to the constant changes in the business world to help clients find the most satisfactory legal solutions for each issue at any given time. ABBANTIA has been involved in some of the most important and innovative issues that the professional services market has experienced.

Since the beginning, ABBANTIA has assisted many companies with their business development. During this time, we have gained our clients’ trust, and the respect of our partners and competitors.

The work PHILOSOPHY at ABBANTIA, which comes from our desire to achieve MAXIMUM QUALITY in services performance, is mainly focussed on our INVOLVEMENT with the customer. We do not see ourselves as only solicitors, we want to understand the business and the specific needs of the customer at any moment; be available for him/her when needed. In order to achieve this we strive to ensure the full TRAINING of our professionals, whatever their SPECIALIZATION, so that we achieve an IMMEDIATE GLOBAL VISION. In many occasions this was found to be extremely efficient.